HTTPS and SSL Certificates: A Must-Have For Every Website 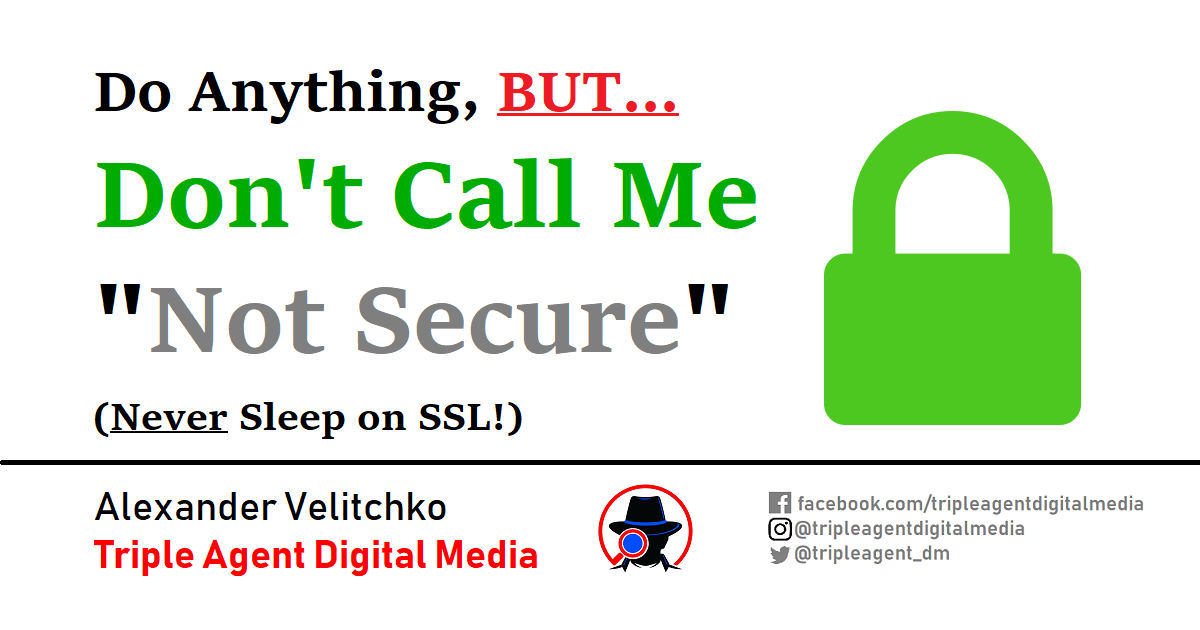 Well … if not, do you KNOW a friend or family member who owns a website?

Either way, look at that website and tell me if you see this in your browser bar (we’re just using our own web address as an example):

Pay close attention to the details.

While #2 does stand out (and we’ll explain why in a moment), you wouldn’t think that just having #1 on its own would drive any customers away immediately upon sight … now would you?

Update Google Chrome to the newest version, and this is what you’ll now see.

The words “NOT SECURE” are what now display in your customers’ Chrome browser bars if your website does not have a security certificate.

Why is it important to have a secure site?

Think about it… more than ½, maybe even ¾, of YOUR customers… they all use Google Chrome.

There’s no way you can afford to alienate such a huge audience.

Having the green padlock 🔒, AND an address that begins with “HTTPS”, are no longer optional. Together, they are now an industry standard of the Internet. It assures you that your customers’ privacy is fully protected using Secure Socket Layer (SSL). It’s the end-to-end security that encrypts any information or form that’s submitted to that site.

Hence, that information is kept out of the great wide open where nasty hackers can reach out and touch it.

What is the Green Padlock?

Don't know what we mean by "green padlock"? Look at this image below to see what a properly-secured site looks like in the Chrome browser bar:

When positioning websites in search results, Google prioritizes sites that are SSL-secured.

A Brief History on Secure Socket Layer and HTTPS: How did they become so important?

Having been an avid Internet user all my life (meaning ever since the age of 2!), I’ve experienced the evolution of HTTPS first-hand, and to say the least, it is very interesting.

10 to 15 years ago - more precisely, somewhere around 2005 to 2010 - I only ever saw addresses beginning with “HTTPS” on order forms for e-commerce websites, as well as government apps and online banking platforms. (Some irony about the big Canadian banks - while TD EasyWeb still has proper SSL to this day, Apple’s Safari browser can’t establish a secure connection with Scotiabank Online.)

At the time, SSL was used mostly for one purpose: to encrypt sensitive personal data, such as credit card information, transmitted in e-commerce payment transactions. After all, nobody would want their credit card hijacked when they’re ordering something off of eBay, Amazon or some other online store … right?

Outside e-commerce platforms, and government and bank websites, most other sites - even the ones which did have forms you could submit to the webmaster - didn’t have an address that began with five comfy, trust-securing letters, instead of just four. HTTPS instead of HTTP.

All of a sudden, I noticed things changing. I noticed that big sites like YouTube and Google (well, YouTube is essentially Google) began to use only “HTTPS” addresses site-wide.

Whenever I’d go to an “HTTP” address on one of those websites, that one ever-important letter - “S” - would be automatically added there too after I hit Enter.

Hmm… why was this happening?

It was certainly an interesting phenomenon.

Over the years, I’ve seen the whole HTTPS thing sprawl out from there and dominate almost the entire Web as we know it.

As I got into the wide world of Internet Marketing and Search Engine Optimization, I finally began to understand why.

Here’s how Google summarizes today’s situation (and they put it really, really well):

“All websites should be protected with HTTPS, even ones that don’t handle sensitive data. HTTPS prevents intruders from tampering with or passively listening in on the communications between your app and your users.”

It’s simple. On a regular website beginning with an “HTTP” address, kind of like an open, public Wi-Fi network, there isn’t any concealment for the information that gets transmitted back and forth between a website’s residing server and its customers. Meaning, ANYONE can intercept and steal that information.

So if your website has a login form, and it’s not HTTPS-secured, your customers’ passwords are in the great wide open where they can be stolen by hackers.

Interesting Fact: Recall that I said that at one point, HTTPS and SSL were almost exclusively used on e-commerce sites. In fact, this was the case for over a decade and a half.

According to CloudFlare, SSL was first introduced waaay back in 1995, the nascent “Wild Wild West” days of the Internet, by the developers of then market-dominating browser Netscape Navigator. They specifically developed SSL and HTTPS to “facilitate ecommerce online.”

Webmasters took for granted the vulnerability of a non-HTTPS website for 15 straight years. Naturally, it was towards the end of this time period that hackers began to compromise nonsecured data - it was that trend that prompted the Web-wide standardization of HTTPS.

So even if you have a tiny blog with no contact form, or maybe even a website that’s nothing more than a digital business card, you cannot sleep on proper SSL security.

With evolving consumer trends, more and more companies—from the Facebooks, Googles & Twitters to the CEOs, influencers & changemakers of the world—are working harder to protect the privacy of all their online customers.

Now it’s your turn to keep up with them. Don’t sleep on switching to the green padlock 🔒 :

to win back the trust of your online audience.

But I don’t have any technical knowledge. How do I do this?

You already know your website DOESN’T DESERVE to be buried under the shackles of The Asylum of Obsolete, Non-Secured Websites.

So here’s what we’re going to do:

For a one-time investment of $100, we will install a fully-functional SSL certificate on your website. We’ll keep you up-to-date through every step of the process, so if any challenges or issues arise during the installation (which, of course, depends on your web hosting provider), you will not feel left out or ignored.

Wouldn’t you rather keep your site hacker-safe BEFORE it happens, instead of trying to clean up the mess afterward?

The young award-winning speaker & bestselling author has shared his message on the same stage as Martha Stewart and Ice-T & Coco at Carnegie Hall; on the same stage as Suzanne Somers & Caitlyn Jenner at the Harvard Club of Boston (where he made his public speaking debut at 19 years of age); at Nasdaq, Coca-Cola and Mercedes; and even at West Point, where his message to the leaders of America's future was: "If you're a 'best-kept secret', it's about as good as being bankrupt."

Alexander has been featured & quoted in ABC, NBC, CBS, FOX, Telemundo, The CW, plus other news publications all over North America - something he also helps his friends & clients to achieve!